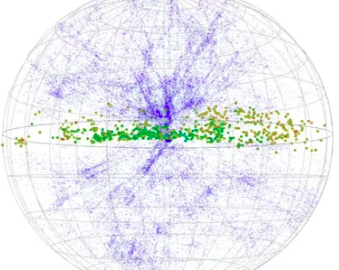 A new multibeam receiver on the Parkes radio telescope in Australia has been used to produce a map of 883 nearby galaxies hidden behind the Milky Way, a third of which were previously unknown.

Dust and light from the billions of stars in the Milky Way, our own home galaxy, which is visible as a band of light across the night sky, obscures the faint light from these much more distant objects. However, radio waves from these galaxies can pass through this thick foreground layer of dust and stars.

The existence of these new galaxies could help to explain the phenomenon astronomers refer to as the “Great Attractor”. This is a gravitational mass tens of thousands of times greater than the mass of the Milky Way, consisting of clusters and superclusters of galaxies, which is pulling our galaxy towards it at more than a million miles per hour.

For the original paper, published in the Astronomical Journal on 9 February 2016, visit https://www.dropbox.com/s/lp22d90kxcad82x/hizoa_arXiv_final%20paper.pdf?dl=0